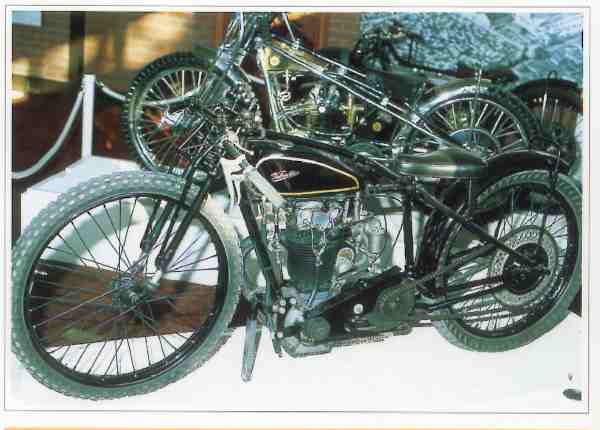 The KDT was one of the rarest racing Velocettes. Only 22 were built by Veloce Ltd, and unsold stock was converted back into the KTT model from which the KDT had been derived.

This exceptional Velocette, designed for dirt-track racing, used the famous overhead camshaft engine of the KTT Mk I with the bore increased from 74 to 80mm to bring the displacement to 407cc. In order to retain the original KTT cylinder head, it was necessary to use a special cylinder head joint with two superimposed bore diameters. The threespeed KTT gearbox was fixed in second, and an enormous 72-tooth sprocket gave the ultra-short final drive ratio necessary for the violent accelerations that were characteristic of this specialized sport.

Inspired by the Harley Peashooter

The braced short-travel telescopic front fork with its single, central spring was strongly inspired by that of the famous HarleyDavidson Peashooter speedway bike, and the frame was built for strength. Its open-cradle structure was built with two parallel tubes at the front and double tubes to make the rear wheel spindle mounting absolutely rigid. As for speedway racing, the 23 inch front wheel had no brake and, so the rider could brace himself into the saddle and control his machine in the long broadsides around the dirt oval, the right side of the machine was fitted with a bracket for the rider's knee.

Of 22 KDTs built, just five motors and this unique complete machine survive. The owner took 12 years to find all the parts necessary to restore it!