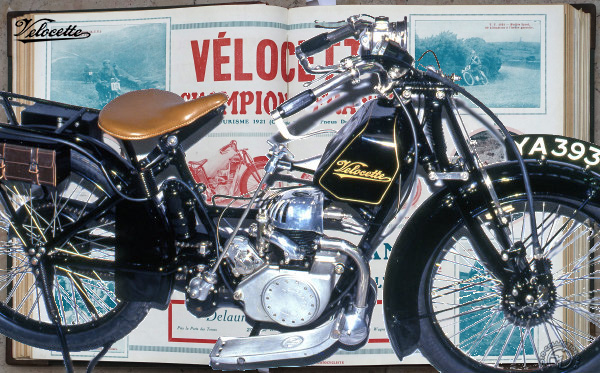 Birth of a great name

As strange as it may seem, the Velocette marque - famed for its oh-so-masculine

The Model A of 1913 built by the Veloce Company of Birmingham was known as the "Velocette," a diminutive form of the firmÂ’s name that emphasized its dainty nature.

It was a utility 206cc two-stroke, designed by Percy Goodman and his father John, who had founded the Veloce marque in 1905. The Velocette was available in three models: a belt-driven single-speeder, a "Deluxe" model with a two-speed transmission and all-chaindrive and an open-frame "Ladies' Model," which had an oddly-shaped aluminum shield over the cylinder head to protect the rider's skirt from the heat and oil of the engine. Veloce Limited promoted the virtues of the new ladies' utility model in a booklet entitled, "The Delights and Economy of Velocetting." In this booklet, Edwardian belles were shown achieving incredible fuel consumptions of over 100 mpg, climbing the steepest hills and using a minimum of oil - due to a lubrication system in which oil contained in a separate compartment was delivered to the moving parts of the engine by exhaust pressure. After WWI, the engine was uprated to 220cc and gained a detachable hatch - giving access to the overhung crank Â– and an oil pump to regulate the lubrication more positively. A works Velocette won a gold medal in the Autocycle Union's 1919 Six Days' Trial.

The Velocette two-stroke line was very popular in its day, which lasted from 1913 to 1926, when the most basic model cost only $57.