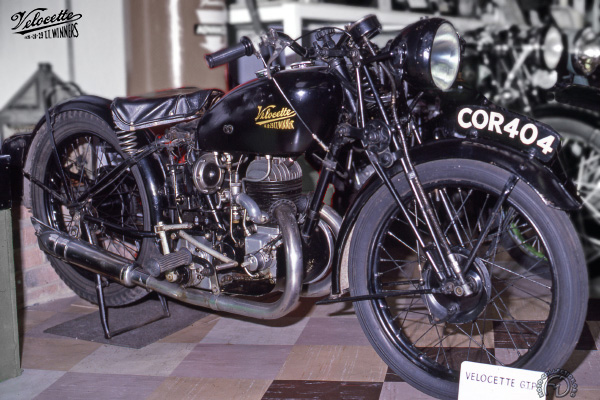 Backbone of the range

The British Velocette is so famous for its overhead-cam racing and sports models that it's sometimes hard to remember that the marque's name is derived from the economy two-stroke lightweights that provided its financial bread and butter.

Success from the Start

The model that sustained the factory in the early 1930s was the 250cc GTP two-stroke tourer, launched in 1930. In its first year, production of the GTP reached almost 2000 units, more than twice the total of all the Velocette four-strokes combined!

The career of the GTP continued serenely until 1946, with 247 units produced in that final year, principally for export. In total, almost 8000 GTPs left the Birmingham factory, a derisory total by modern standards but not bad for a time when the fame of many marques rested on even smaller production figures. Velocette's experience of two-strokes dated back to 1913 when Percy Goodman, son of the marque's founder, created a 206cc unit to power a range of lightweight bikes, which included an open-frame ladies' model. The engine of this 1937 model was equipped with an aluminum cylinder head with twin large-diameter exhaust pipes. The lubrication system had a separate oil tank with a pump actuated by the throttle twist-grip, a method reinvented by the Japanese years later. The coil and battery ignition was replaced on the final series by a chain-driven magneto. The four-speed gearbox with foot selector was a characteristic rarely found on a little utility motorbike.

Simple and robust, the 250 GTP two-stroke single was one of Velocette's best-sellers during the 1930s.