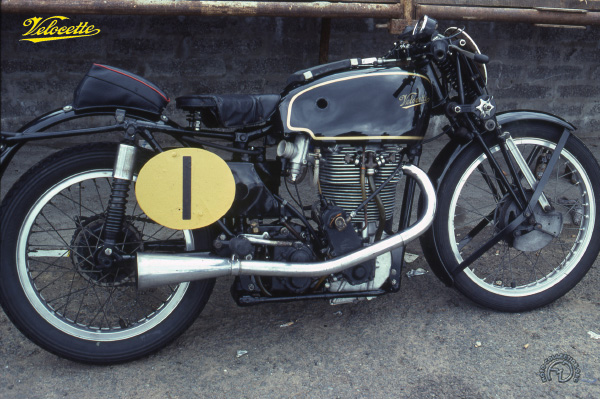 Designed by its rider

Velocette, a success with 350cc racing, moved up into the 500 class in 1934. That first year, Walter Rush won the 500 Ulster GP mainly because most of his rivals retired! Velocette's first 500 was no match for Norton's works machines. To boost its chances for success, Velocette recruited Stanley Woods, after his 1935 victory in the Lightweight and Senior Isle of Man TTs with 250 and 500 Moto Guzzis. Woods, who had seen the 350 Velocette at that same event and recognized its potential, joined Velocette in 1936.

Woods had very precise ideas on motorcycle design and had a marked influence on Velocette's technicians. After racing with a transitional machine in 1936, a completely new works 500 was designed in 1937 and only underwent minor modifications until the 1939 season was cut short by the start of WWII.

The frame, derived from the 350 KTT's, was fitted with swing arm rear suspension and tested in 1937. Partly conceived by Woods, the suspension was oil-damped; pressurized air functioned as the springing medium. The engine was the 350cc unit enlarged from

This 500 Velocette had the distinctive feature of oleopneumatic rear suspension at a time when many machines still had rigid frames .