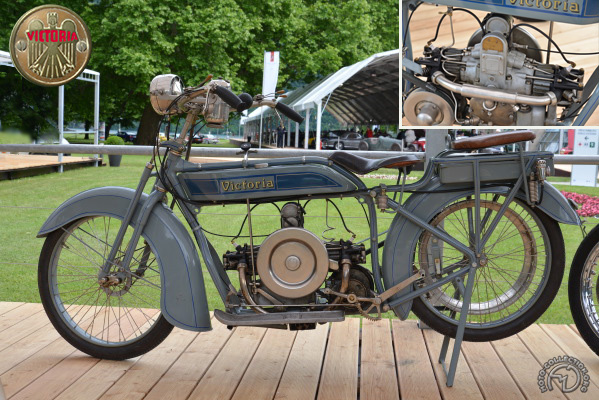 The story of Victoria is a history of the German two-wheeler industry. Most of the country's leading engineers worked for this pioneering firm at some time. From 1920, Victoria used BMW boxer engines mounted longitudinally in the frame. In 1923, when BMW launched its first transverse-engined motorcycle with shaft drive, Martin Stolle, creator of the BMW flat-twin, joined Victoria where he created the 1923 KR2.

This "anti-BMW" retained the fore-and-aft engine layout, along with a two-speed gearbox and belt drive. On the other hand, it had pushrod overhead valves with exposed rocker gear, while BMW did not produce its first ohv flat twins until 1925.

Golden Age for the Industry

It was a golden age for the German motorcycle industry, which produced 15,000 machines a year. Victoria was one of the country's biggest manufacturers Â– along with NSU and Wanderer - and engaged in an aggressive racing program. In 1925, the racing version of the KR3 was fitted with a supercharger, the first time forced induction had been used on a two-wheeler: it was a field in which Germany would specialize. At Freiburg, in 1926, Adolf Brudes set a German record of 103 mph. The supercharger was subsequently discarded because of rear cylinder overheating, but development of the flat twins continued into the 1930s. The KR2 of 1923 developed 12 hp at 2600 rpm, while the KR6 of the late 1920s, enlarged to 598cc, produced 18.4 hp in touring tune and 25 hp as a racer.

The original KR2 of 1923 was belt-driven, while this KR3 Sport had chain final drive and a threespeed gearbox.