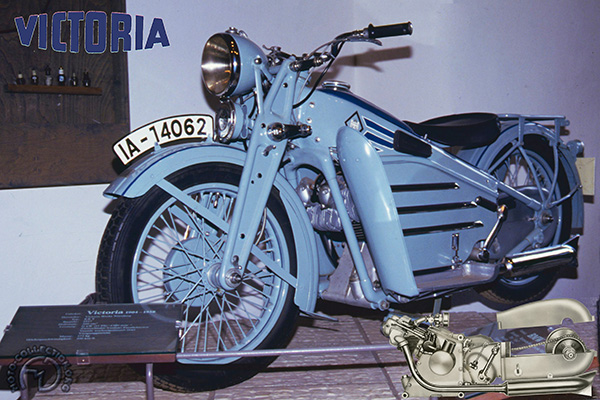 Martin Stolle, who designed the original BMW flat twin, worked at Victoria in 1923 and 1924 to develop their own-make flat twin engine to succeed the BMW units they had previously brought in. Stolle returned to Victoria in 1934 to design the highly-original 500cc KR8.

The engine was an inclined, parallel-twin built-in unit with a four-speed transmission: This powerpack was concealed behind detachable pressed-steel side panels, which incorporated leg shields. Victoria needed the new model to be a sales success. Though Stolle counselled against it, Victoria rushed the KR8 onto the market before it had been properly developed, and it was a disaster. Badly lubricated and naturally poorly cooled,

Desperate measures were called for. In 1936, Victoria brought out the KR9, a version of the KR8 which had been redesigned for maximum reliability. It had an aluminum cylinder head, still with side intake valves, but also with overhead exhausts, adopted in the interests of improved cooling. Few other machines - Martinsyde in Britain, a few American makes and Guzzi in Italy - have used this unorthodox valve disposition. Priced at 1295 Reichsmarks, the KR9 was well-positioned on the German market, but the bad reputation of the KR8 had stuck, and the public preferred the classic KR600 flat-twin: more costly, but of proven reliability. Victoria didn't argue with customer choice, and withdrew the problem child in 1937, to concentrate on small displacement two-strokes.