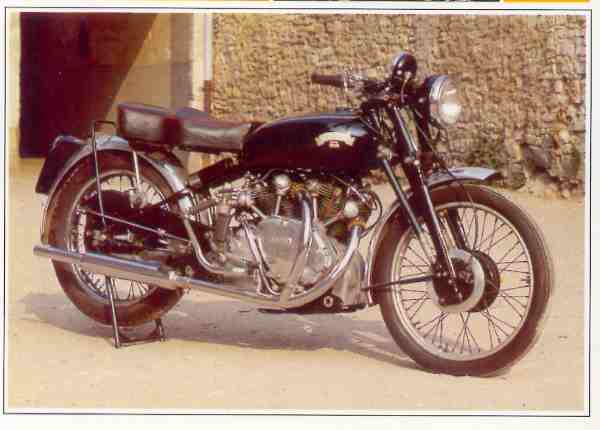 Fewer than a hundred Vincent-HRD Series A were built between 1936 and 1939. This 1000cc V-twin was one of the greatest motorcycles of all time, an inspirational design by Australian engineer Phil Irving. The Series A was capable of nearly 110 mph, though the ample torque of its 45 hp engine was really too much for its clutch and gearbox. Phil Vincent, the brilliant young director of the Stevenage company, and Irving redesigned their V -twin after WWII to produce the legendary Series B, which reached new heights of creativity.

On the new model, launched in 1945, little remained of its predecessor save the 84x90mm bore and stroke, the duplex braking and the pivoting triangular cantilever rear suspension. The included angle between the cylinders was increased from 47 to 50 degrees to suit the available magnetos; the gearbox was solidly bolted to the crankcase, greatly increasing frame rigidity.

The Series B actually lacked an orthodox frame. The engine was suspended from a triangular backbone that also acted as an oil reservoir and a mounting for the twin damper units of the cantilever rear suspension. These broad principles were taken up by Yamaha in the 1970s. The front fork, a classic girder pattern unit, was replaced in 1951 by the celebrated Girdraulic suspension, a girder unit with long hydraulic struts behind the forged light-alloy blades. To complete the picture, the Series B Vincent had twin front brake drums.

The remarkable Vincent V-twin had no conventional frame; the engine was bolted to a triangular steel backbone to form a rigid unit.