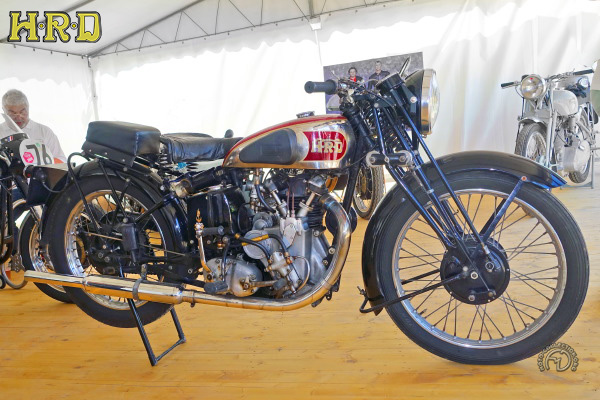 Phil Vincent's 1927 prototype had a pin-jointed triangulated frame, and was followed by a spine-framed 250. He soon realized that such advanced concepts were liable to frighten away the customers, so most of his prewar production models used conventional diamond frames.

When a batch of allegedly special JAP engines let Vincent down in the 1934 Senior TT, he decided to make his own power units, designed by the brilliant Australian engineer Phil Irving. These 500cc engines had a highĀ· set camshaft operating the valves through short pushrods set in splayed aluminum tunnels; double guides kept the valves in perfect alignment. This arrangement combined the simplicity of overhead valves with the high-speed capability of an overhead-camshaft. The Vincent-HRD single was made in three versions: Meteor (60 mph) and Comet (92 mph) road bikes, and the TT Replica racing version. These machines had a more conventional frame than Vincent's prototypes (and the postwar models with their ingenious spine frames), and they were renowned for their outstanding handling and superb braking. Eventually, Irving developed the immortal Vincent V-twin out of the 500.

The Vincent-HRD Comet of 1936 was one of the finest sporting singles of its day. The little factory also offered a more highly tuned "Comet Special."