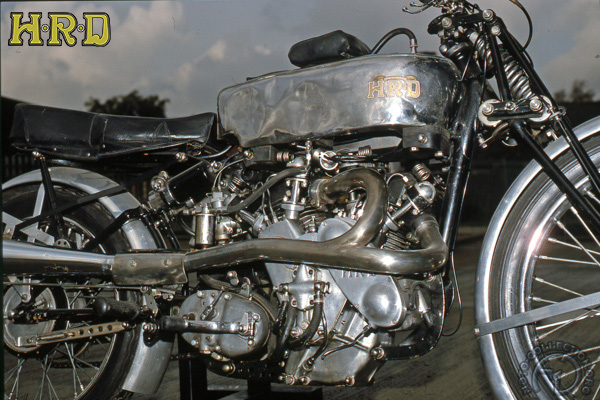 In 1936, Phil Irving, the brilliant Australian designer of the Vincent-HRD, mounted two top halves of his 500cc Meteor single on a common crankcase to create a 47-degree Vtwin - the fastest road bike of its day - which he baptized the "Rapide" (and which was affectionately known as the "plumber's nightmare" from the many external oil pipes).

Even in a special long-wheelbase frame, the engine was a tight fit, and full use of its massive torque quickly revealed the model's Achilles' heel, the transmission. First the clutch would slip, then the layshaft bearings in the Burman gearbox would fail. And if this was cured, then the casing would split. But when it was going well, the Rapide Series A was unbeatable, and even in road trim was capable of 100 mph on the Brooklands track. Works tester George Brown recorded a top speed of 113 mph.

More Costly than a Small Car

Marketed at more than the price of a family automobile in 1938, the Rapide had Phil Vincent's excellent cantilever rear suspension and the original feature of twin brake drums on front and back wheels. Just 78 Series A Rapides were built between 1936 and 1939. The full potential of the Series A was shown when works rider Ginger Wood, riding the one and only racing model to be built that

had been fitted with a special TT clutch, set a new lap record at Brooklands and went on to dominate a race at Donington, attaining almost 130 mph before he was sidelined by clutch failure.