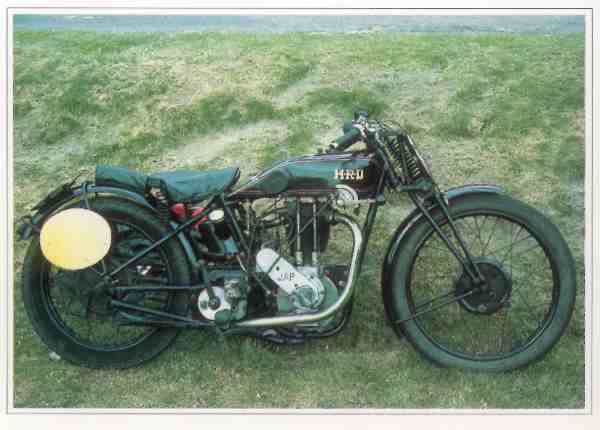 Though the initials "HRD" are more usually associated with the name Vincent-HRD, the Wolverhampton-based marque had a distinguished history before Phil Vincent rescued it from financial difficulties in 1928.

The marque was founded in 1924 by WWI flying ace Howard R. Davies (HRD), who in his days as racing manager of AJS had made racing history by being the only man ever to win both Senior (500cc) and Junior (350cc) TTs with the same engine, a 350 AJS. Convinced that he could build a better machine, "HRD" unveiled his three-model range at the 1924 London Motor Cycle Show after a race against time to get them ready for the opening day (he had to bribe a night watchman to open up the Olympia exhibition building after hours to get the machines on the HRD stand in time).

They caused a sensation, with their ultramodern design with loop cradle frames and the pioneering use of a saddle tank. The range all had JAP engines: the Howard Davies 90 was a race-tuned ohv 500, the 80 was a supersports ohv 350, and the 70/S was a side-valve 500 intended for sidecar use. The marque had a record of sports success: H.R. Davies himself won the 1925 Senior TT (his "racing special" engine used a single-port cylinder from a 1000cc JAP V-twin) and came second in the Junior, while ace JAP tuner and record-breaker Bert Le Vack lapped the Brooklands circuit at over 104 mph before the 1925 Olympia Show, and set new flying kilometer and mile and 5-kilometer and 5-mile records.

This rare 1926 HRD 90 TT Replica is a customer competition version of the machine on which Howard Davies won the 1927 Senior TT.