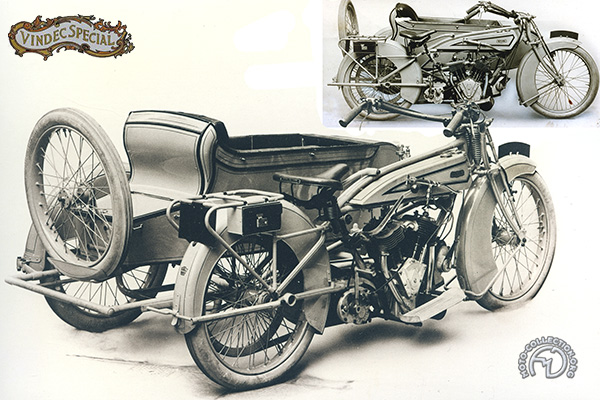 Sold as a set

This elegant Vindec made its debut in 1915 as a complete sidecar outfit - not as a solo machine equipped with a bolted-on "chair." At that time, the sidecar was considered a viable alternative to the light car and was widely used by the army and government. So when a Russian official came to England during WWI to negotiate the purchase of motorcycles for the Russian Army, he rode to his meetings in a sidecar outfit.

Vindec was a subsidiary of Brown Brothers, the major British suppliers of garage equipment and accessories to the motor trade, which - between 1902 and 1929 - produced a well-made range of machines mostly powered by JAP four-stroke engines or 172 and 224cc Villiers two-strokes.

The 750 Sidecar Outfit was one of the best of its day, incorporating many clever ideas. For instance, the saddle was pivoted on the top tube of the frame with its movement controlled by a spring (in addition to the normal saddle springs), while the girder forks used no fewer than six springs. The interchangeable spare wheel and the baggage locker at the rear were also ingenious. The power unit was the very latest JAP side-valve V-twin, equipped with a clever lubrication system in which the suction created by the descending piston drew the oil through oilways to the friction surfaces.

This very impressive sidecar outfit, built by a subsidiary of a famous automotive trade supply company, went on sale in 1916, powered by a 770cc JAP V-twin.