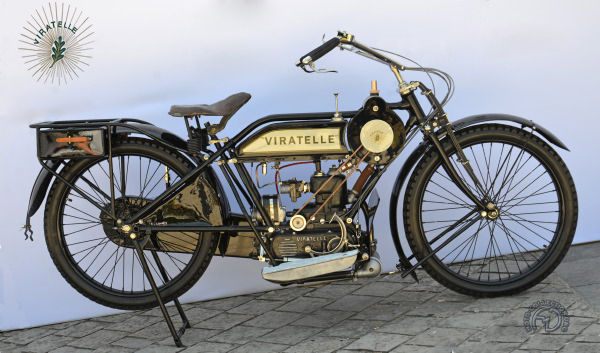 The original Viratelle, built in 1907 by the eponymous inventor, was an advanced machine with a water-cooled, 178cc single cylinder four-stroke engine built in unit with an epicyclic three-speed transmission (controlled by cable from a little lever on the handlebar) and chain final drive. The overhead-valve gear was totally unorthodox, with concentric intake and exhaust valves.

The Viratelle's characteristic round radiator incorporated a cooling fan driven by a round rawhide belt from a pulley on the magneto shaft. And if the machine broke down, the foot rests could be unclipped and set at 180 degrees to act as pedaling gear.

The machine evolved continually until production ended in 1924. By 1919, Viratelle modernized his design and offered a choice of two models, a 350 single and a 700cc twin. The engine layout was more conventional, with side-valves and the crankshaft set across the frame rather than fore-and-aft as in 1907. The drum-shaped radiator incorporated a turbine driven by a round leather belt from the crankshaft and was fed by thermosyphon action. The transmission was still epicyclic, though now a lever on the handlebars allowed the rider to preselect a speed, which was not engaged until the clutch pedal was pressed. The final drive chain was fully encased, a detachable starting handle was clipped to the luggage grid and, though the frame was rigid, a complex system of linkages between saddle and foot rests

ensured the comfort of the rider.

Advanced in design, but too complex for its day, the Viratelle nevertheless remained in production for around 20 years.