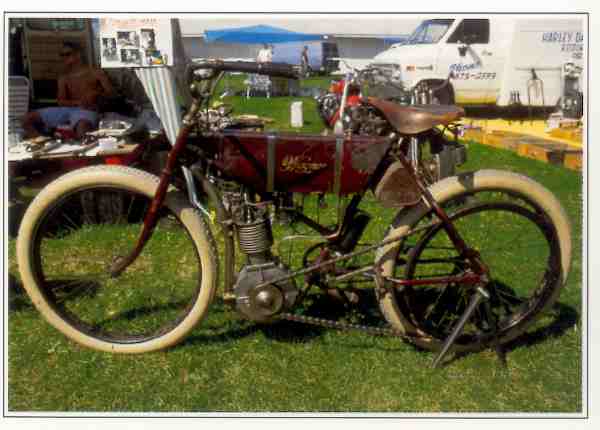 There are few histories of the motorcycle that mention the name of the little American marque Wagner - and even if they do, they're more likely to illustrate the boss's daughter Clara Wagner, a pretty young blonde in her 20s, than her father's

A Medal for Clara

Clara does deserve her place in the company's history, for at the age of 18, she rode a Wagner motorcycle in an endurance run from Chicago to Indianapolis and, moreover, finished without having incurred a single penalty point. Though she was unplaced in the final results, the other competitors were so impressed that they joined together to buy Clara a special gold medal to commemorate her achievement.

The Wagner marque came from the Twin Cities, and was founded at 22 East Fourth Street, St. Paul, in 1901. One of America's pioneer motorcycle manufacturers, Wagner remained in production until 1914. Its four model range used engines of 2 to 4 hp, either made in-house or by Thor (as fitted to the first Indians). A distinctive feature of the Wagners was the unusual loop frame with a diagonal cross-brace above the engine. Perhaps the most curious machine ever made by Wagner was its twin-engined tandem; one was built in 1904 and another in 1911. Two single-cylinder engines were mounted one behind the other, each one driving the back wheel - which had a special double pulley for the purpose - through a separate belt.

In a remarkable state of preservation, this beautiful 1904 Wagner is the kind of bike on which young Clara Wagner bit the headlines not long after the turn of the century.