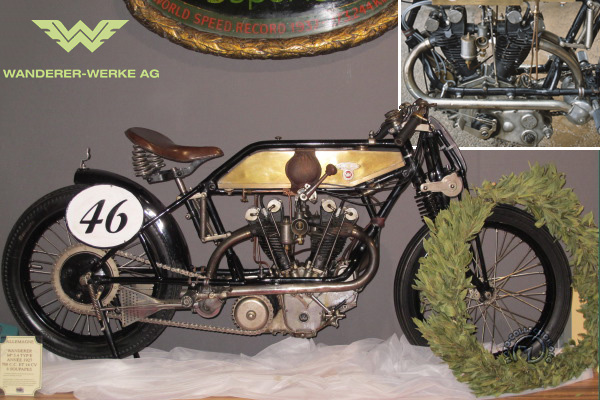 Originally designed in 1916, Wanderer's Vtwin engine changed little over the years. A three-speed gearbox was built into the engine unit, starting with the 616cc sidevalver in 1922. The belt final drive was linked to a primary drive, whose epicyclic reduction gear with an eccentrically-mounted output shaft simplified belt tensioning. The frame, copied from FN, had a double-cradle enclosing the engine, but the rear suspension fitted to the earliest models was absent.

The Luxury of Four Valves

In 1925, Wanderer introduced a 750 with two overhead-valves per cylinder. In 1926, it was followed by the 750 Luxe- more precisely, it was 708cc -with aluminum pistons and a nickel-chrome steel crankshaft running in roller bearings.

The primary transmission of the 616cc model was still retained but in conjunction with the chain final drive. In 1928, the Wanderer became a true 750 (76x82.5mm, or 748cc), offered with either two or four valves per cylinder. The FN-type frame was discarded in favor of a double-cradle unit with a Webbtype fork - the first time this form of front suspension had been used on a Wanderer. They were also fitted with front brakes. The appearance was further altered by a two-in-to-one exhaust system to replace the distinctive four-into-two layout, with a heavily-finned cast-iron exhaust pipe reminiscent of the Brough Superior's, and the comprehensive electric installation was supplied by Bosch.

Among the many refinements on this advanced machine was a fuel gauge that was incorporated into the gasoline tank filler cap.