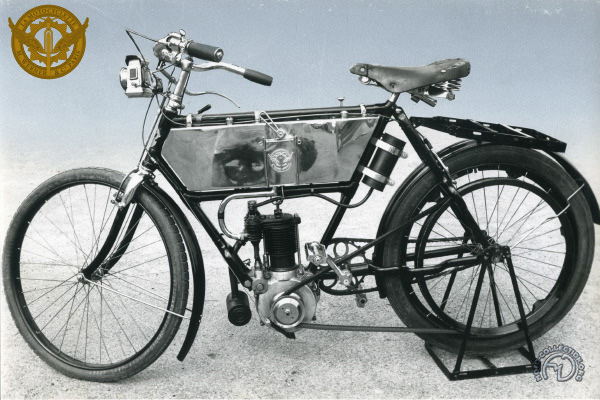 On January 7, 1898, the brothers Michel and Eugene Werner, two émigré Russian journalists, patented their "Motocyclette" powered two-wheeler, which had its engine mounted above the steering head, driving the front wheel by belt. They had already built two prototype.

The First True Motorcycle
Far-sighted businessmen and prolific inventors, the Werner brothers applied for patent after patent - typewriters, phonographs, cinematographs and motorcycles were their main fields of endeavor. They experimented with various engine locations before unveiling their masterpiece at the 1901 Cycle & Motor Show in Paris. The "New Werner" was the first practical powered two-wheeler with the engine mounted in the classic bottom-bracket position. Though others had experimented with this location, the Werners were the first to consider it worth patenting and to issue licenses for its use. Despite that the Werner Company failed in 1908 after the death of Michel at the early age of 46. The brothers had invested their money in Russian Securities, which suddenly collapsed, and Eugene Werner was ruined.

Competition Success
Werners were very successful in early competitions; their star rider, Auguste Buquet's New Werner, was the first of seven motorcycles to finish in the 554-mile Circuit du Nord race in 1902: his time was less than 34 hours! The following year, Buquet was the first motorcyclist to finish the marathon 870-mile. Paris-Vienna race, coming in fifth overall.

This 1904 Werner bas the then-revolutionaty layout of side valves ahead of the cylinder.