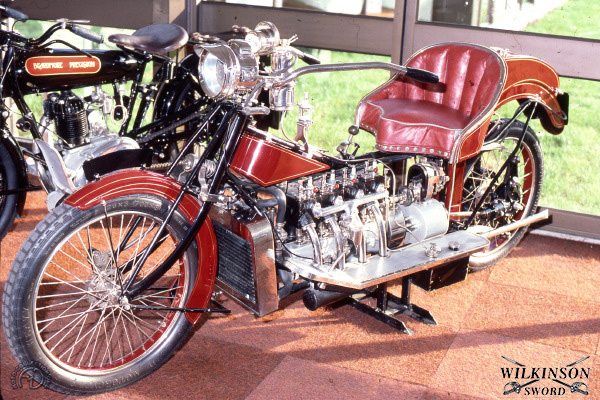 In the years of peace between the Boer War and WWI, the famous London swordsmithing firm of Wilkinson Sword built cars and motorcycles to keep its Acton works busy.

Guns on the Run

In 1908, Wilkinson built a prototype scouting motorcycle for the Army, with a machine gun mounted on its handlebars. But when this proved a dead end, its transverse V-twin engine was replaced with an inline four and offered it as a luxury touring machine.

Known as the TAC (Touring Auto Cycle), it was the hit of the 1909 Stanley Motor Cycle Show, with an armchair seat, front and rear leaf springing and the option of wheel or handlebar steering. The TAC was redesigned in 1911 and became the TMC (Touring Motor Cycle). The automatic intake valves became mechanically-operated side-valves, and pump assisted liquid cooling with a triangular water tank behind the steering head and a radiator below was adopted. The fuel tank was still above the rear mudguard, but on the model illustrated, the oil tank was under the left footboard. A pump operated by the rider's heel forced the oil action through a sight-feed on the top tube. Bevel gearing replaced the underslung worm drive of the original model. The leaf-sprung rear suspension remained, but a more conventional (and rigid) Saxon girder fork with a single horizontal spring was fitted. With war imminent, Wilkinson reverted to making swords and bayonets and sold their automotive projects to the Ogston Motor Company, who discontinued the TMC in 1916.

Some 250 examples of the remarkable Wilkinson TAC and TMC motorcycles were built between 1909 and 1916, the final version with a 996cc engine also used in a light car.