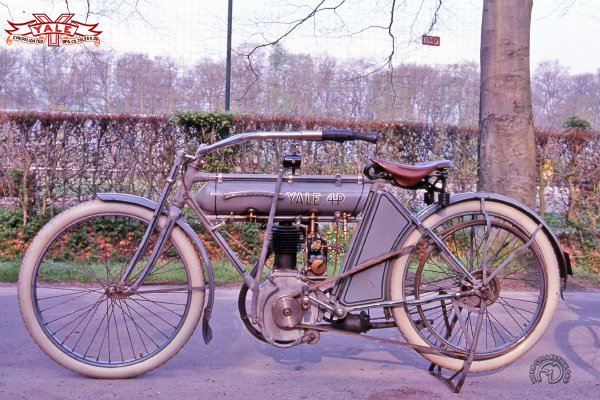 In 1903, George Wyman rode into New York City on his Duck motorcycle at the end of a fatiguing 53-day trip on often virtually non existent trails. He was the first motorcyclist to ride from San Francisco to New York, a pioneering performance avidly followed by the readers of America's first motorcycling magazine, Bicycling World & Motorcycle Review, which had sponsored the trip.

From Duck to Yale

The makers of the Duck were anxious to profit from this success. While they continued to manufacture the Duck-California (1904) and then the Yale-California (until1907), they also sold a manufacturing license to the Kirk Manufacturing Company of Toledo, Ohio....,... already known for the Yale automobile, who built Yale and Kirk motorcycles. With confidence gained from that transcontinental ride, Yale concentrated all its efforts on endurance events. In 1909, three Yales dominated the 600-mile race organized by the Chicago Motorcycle Club, with a winning average of 20 mph. It was the last notable success for the marque, which took place in few contests after that. Motorcycle production was spasmodic, and the works preferred to concentrate on the more lucrative business of manufacturing munitions, ahead of America's entry into WWI. The last Yale motorcycles were built in 1915, among them a well-made 350cc two-speed twin with chain drive.

This later version of the Yale single is a typical sports bike of the day, with its massive handlebars and auxiliary pedaling gear.