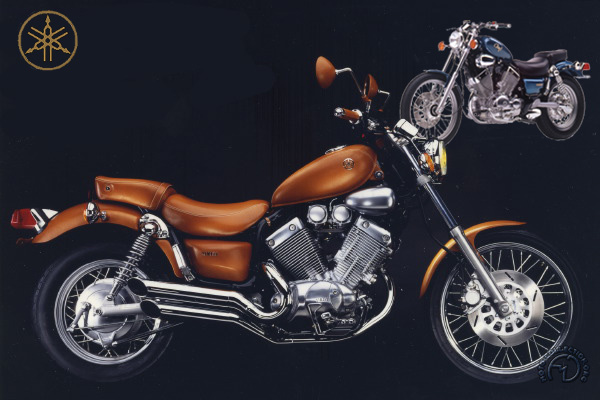 Choppers - those caricatures of motorcycles with their exaggeratedly long front forks - were born in the US during the Sixties and quickly inspired the Japanese factories to produce Americanized models. The fashion took longer to catch on in Europe, but nowadays in 1995 custom bikes, represent more than 13 percent of the European market, with the Yamaha :XV535 dominating the scene.

Custom styling underpinned a new trend towards sensible, practical bikes putting greater emphasis on enjoying riding in a laidback, safety-conscious manner rather than emphasizing sheer performance. Modern custom bikes have stylishly reinvented a forgotten role of the two-wheeler, that of providing civilized daily transportation. Easy to ride, clean and economical, the :XV535 was also extremely competitively priced, making it the best-seller in its category, with sales of some 2000 units in 1991 in France. Stylish and Trouble-Free

With a low saddle height making it easy to handle, the :XV535 keeps its center of gravity as near the ground as possible by employing a cunning plan: the stylish tear-drop fuel tank only holds a 1.3-gallon (US) reserve supply the main 2.25-gallon (US) tank is mounted beneath the saddle. The generous use of chrome plating sets off the engine - which, American style, simply has to be a V-twin, whose torque and flexibility suit such a bike to perfection - to maximum advantage.

The combination of good looks, quality and competitive pricing made the XV535, launched in 1987, the best-selling custom bike of its day.