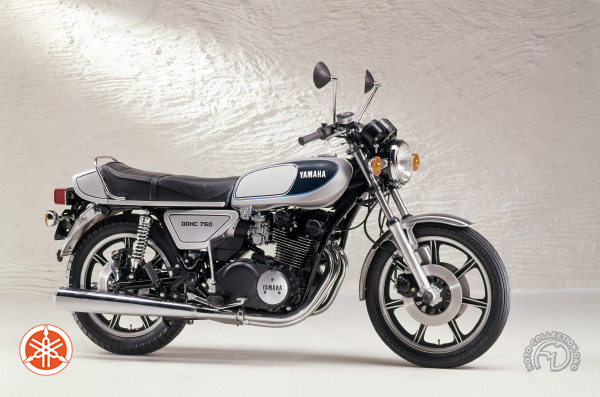 Already famed for its two-strokes, Yamaha had evely intention of continuing its growth cycle. The firm's ambition in the late Seventies was to challenge the giant Honda on its home ground, the big four-stroke multi.

It was a difficult task for Yamaha to implant a new image on the big four-stroke market - already dominated by Honda, followed by Kawasaki and Suzuki - without being tagged as a copycat. Yamaha chose, with varying degrees of success, to go for technical originality, calling on outside designers to develop the technologies in which the firm was not yet experienced.

An XS of Originality

Yamaha chose the prestigious Porsche to develop the twin-cylinder engine of the TX 750 and the shaft drive of the XS 750. Porsche was as good as its reputation; the XS was the sole motorcycle whose transmission incorporated a perfectly homokinetic tripode joint behind the gearbox rather than the normal cardan joint. Moreover, the Yamaha was also the only modern Japanese bike equipped with shaft final drive since Lilac had gone out of business in 1961. Another original feature of the XS 750 was its engine, whose three cylinders had firing intervals of 120 degrees. With balance virtually equal to that of a four-cylinder engine (but more costly to achieve at this time), this type of engine has the great advantage of being more narrow. But no matter how technically successful it was, it could not make headway against its fourcylinder rivals. XS750 is replaced by XS850 in 1980.

The XS 750 was, along with the Laverda 1000, one of tbe few three-cylinder four-strokes to go into series production.