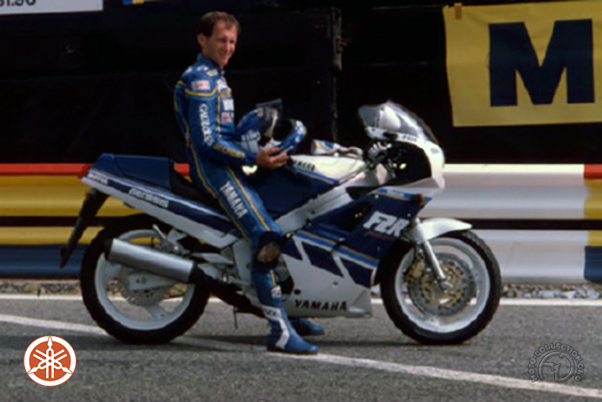 Birth of a new generation

A frame that consisted of twin aluminum beams linking the steering head to the rear swing arm mounting, the intensive use of light alloy and a four-cylinder power unit with two overhead camshafts and 20 valves, such a high-tech specification would scarcely excite today's motorcyclists. But it was a tremendous sensation when it was featured on the Yamaha FZR 1000 at the Cologne Show at the end of 1986: no massproduction sports bike had boasted such an advanced specification previously.

The arrival of such an aggressive super sports bike from Yamaha was even more surprising as up to then, the marque had seemed quite level headed in its model policy. However, that prudent nature would re-emerge in the subsequent career of the FZR, whose styling grew more restrained, unlike its rivals, which became more and more like racing bikes.

From frame to brakes, the FZR's competition ancestry was reflected in every detail and it proved to be a remarkably balanced machine. Rigid but not skimpy, it was as much at home on the race circuit as on back routes or in city traffic. Precise and stable, its roadholding was the best on the market at that time. Nor was its sophisticated mechanism lacking in qualities, even in the French market model, which was legally restricted to an output of 100 hp.

The dynamic fairing of the Genesis concealed a most exciting valve gear layout.