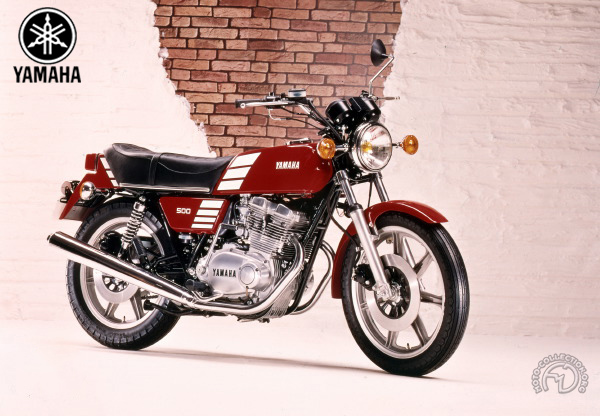 The 1973 fuel shortage and the first antipollution measures enacted in the US sounded the death-knell of dirty, gas-guzzling two-strokes.

Yamaha, which up to then had specialized in two-stroke bikes, reacted swiftly. From 1976 it offered a coherent, yet diverse, upper range with single- (XT500), twin- (XS500) and three-cylinder (750) four-stroke power units. The XS5OO was an extension of the famous RD350, epitome of the mid-range sports bike. It incorporated a number of refinements rarely seen at that time, such as an eight-valve head. This oversquare twin was mounted in a frame of classic construction. with disc braking and the novelty of cast light-alloy wheels.

With good handling, a natural riding position and comfortable suspension, the Yamaha had a well-balanced ride. Its precise, fast cornering allowed for full enjoyment of the

engine's power. Though it suffered from poor pickup at low speed, plus a slight mid-range flat spot, the engine could quickly spin up to a spectacular rate of rotation thanks to its low inertia, and was powerful and quicktempered when the heat was turned up. For a first attempt, Yamaha had done really well, and the XS5OO established itself from the outset as a medium-displacement machine that was both well-balanced and brilliantly executed. Sadly, it was not always totally reliable.