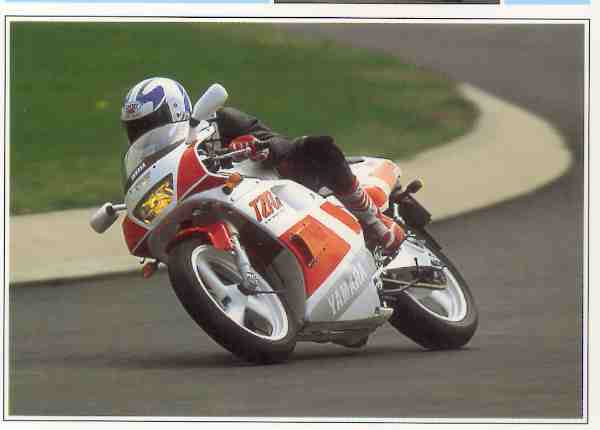 Offspring of a champion

The TZR 125 R is the seventh model built in Europe by Yamaha and the second to be manufactured by Belgarda, Yamaha's Italian Importer (Later Yamaha Motor Italy). It was basically at Belgarda's request to meet the specific demands of the Italian market and to counter the domination of Italian marques in the 125 category that the replacement for the TZR 125 was developed.

The TZR 1.25 R had to set its sights higher than its rivals. Its overall dimensions, its styling and its construction were directly inspired by the competition TZ 250, in particular the one that John Kocinski used to win the World Championship. The TZR 125 R has an aluminum Deltabox frame and a fully-boxed "boomerang" rear suspension arm. All of its equipment is at an equally high level of quality, like its reversed telescopic fork, its instrumentation (taken from the FZR range) and its 20.5 inch front disc brake. Finally, it has a useful little storage compartment hidden beneath the saddle.

In its Japanese market version, the engine of the TZR develops a healthy 32 hp, which -

aided by an extremely aerodynamic fairing - reaches a top speed of around 106 mph. The TZR became the benchmark in its category. Sadly, in some export markets, the government restricts the power output of the TZR. In France, for instance, the TZR is only permitted a miserly 13 hp, cutting top speed to 80 mph

The impressive TZR 125 R, launched in 1992, offers exceptional performance with the same styling as the competition 250