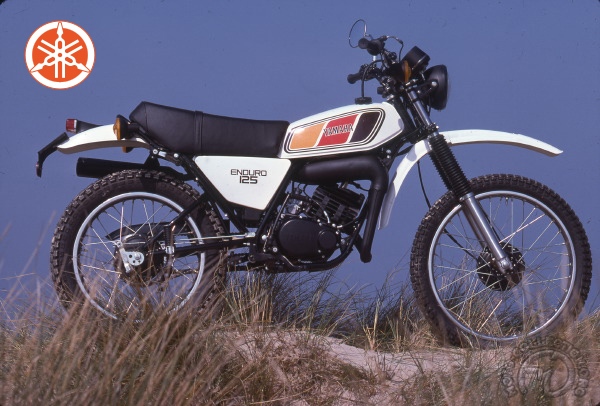 Launched in 1977, at the dawn of a new golden age for motorcycling, the DT/MX Yamaha had a multitude of advantages. It was the best balanced of the new and fashionable breed of explosive trails bikes and a remarkahly reliable bargain.

The public, tired of utility machines, welcomed this versatile new breed of sport bikes with open arms. Off-road, they were a virtual match for real enduro machines. On-road, the comfort of their long-travel suspension was fantastic. Their lively engines and excellent handling made them an effective mode of transport in urban traffic.

Off-Road Bikes for the Town

The French fashion of using trail bikes in town spread across Europe, starting with the Latin countries. The DT/MX copied all the latest refinements of the motocross machines. In 1980, it was given a cantilever rear suspension built up with square tuhes, with a shock absorber beneath the saddle. In addition, the DT/MX had an electronic ignition. In turn, it gave birth to the DT/ LC. But the basic DT/MX remained in the catalogue until 1993- and it still retains a faithful following among enthusiasts. Despite changes in motorcycle license regulations, which throttled sales of 125cc machines. The DT/MX remains one or the worldÂ’s top-selling motorcycles. Thanks to record sales or 20,000 units a year in France in the late 1970s, Yamaha overtook Honda to become market leader in 1977, 1978 and 1981 .

In outstanding combinantion of value for money, quality and sheer enjoyabilily found the 125 DT/MX over 150, 000 customers in Europe alone.