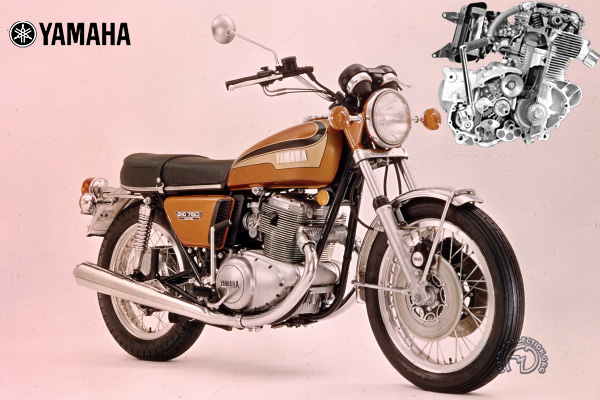 A new breed of twin

At the beginning of the Seventies, Honda was still market leader by a considerable margin, despite the astounding rise of Yamaha, whose very sporty 250 and 350cc twincylinder two-strokes seemed to be everywhere.

In 1970 Yamaha only had one four-stroke the XS650 twin-cylinder - in its catalogue. Anxious to join the exclusive coterie of companies making "big bangers" as a full member with an original turn of mind, Yamaha revealed the depth of its ambition and its uncertainty over which direction to take - by unveiling some quite remarkable prototypes. These included the 1971 GL750, a fuel-injected four-cylinder two-stroke with liquid cooling, and the rotary-engined RZ201 unveiled in 1972.

But ultimately Yamaha chose to follow an entirely different path and in 1972 put its first large modern four-stroke, the TX750, on the market. Compared witt, the sporting Kawasaki 900 Z1 which went on sale in 1973, Yamaha had taken a very cautious route, with a twin-cylinder four-stroke grand tourer intended to pick up the torch dropped by the British vertical twins. There was one major difference: the inherent vibrations of a 360 degree parallel twin were eliminated by chain-driven balance shafts. It was a sound idea and it was widely accepted. Unfortunately, the TX suffered from a number of major problems: it broke easily and overheated too often.

Elegantly rounded, this 1972 TX bas been fitted with an oil-cooler to improve its reliability.