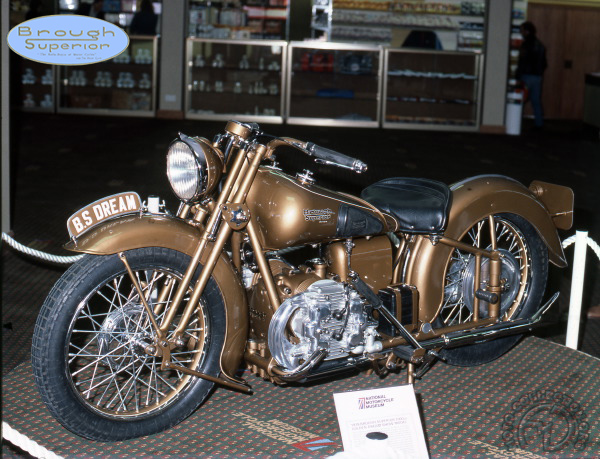 In his constant search for perfection, George Brough frequently sought to replace the 1000cc ]AP V-twin power units traditionally fitted in his Brough Superiors with more refined multicylinders. It all began in 1927 with a transverse l000cc V4 prototype whose layout was remarkably similar to the modern Honda Pan-European.

In 1928, Brough unveiled a straight four designed in conjunction with the Swiss firm MAG. One of the few private owners to take delivery was T. E. Lawrence- Lawrence of Arabia! An 800cc Austin-engined four followed in 1931, but it wasn't until1938 that George Brough achieved his ambition with the "Golden Dream," designed by a former ]AP engineer.

Its transverse "H-4" engine was effectively two superimposed flat-twins with coupled crankshafts; it was complex but compact and well-cooled. The crankshaft eliminated the characteristic "period" associated with flattwins. To get the cylinders in perfect alignment, Brough used forked connecting rods. The oversquare engine was in one

piece with the transmission. Sadly, only four or five "Golden Dreams" were built beforethe outbreak of war brought an end to Brough Superior production forever.

The sensation of the 1938 London Motor Cycle Show, this example- one of two surviving Golden Dreams - is today a star exhibit at Britain's National Motorcycle Museum near Birmingham.