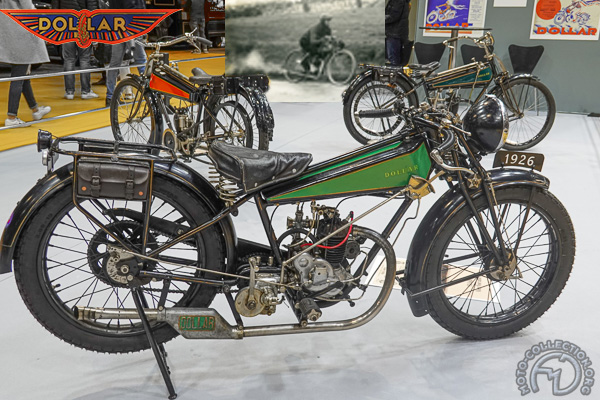 When the Dollar made sense

This active little factory based near Paris began production in 1925 and specialized in four-stroke machines. They had a range of 125, 175 and 350cc models Â– all with overhead-valves Â– in an exceptional line-up for the period.

The 125 and 175 were initially offered with a separate two-speed, chain-driven gearbox and belt final drive. Then in 1927, the Sport model received chain final drive in conjunction with a three-speed gearbox with a tank-side shift lever. Following a popular trend, each model was offered with the choice of standard tires or large-section balloon comfort tires.

Launched in 1927, the 175 CT3 Sport had a fuel consumption of 100 mpg. Priced at $830, this four-stroke cost more than most two-strokes of the same displacement. The Peugeot 175 cost $690, and the single-speed Motobécane was only $285, but the Dollar offered performance equal to a 250 two-stroke. Dollar's policy of mass-market sales led to a lowering of its price, and these shiny little Dollars enjoyed great success and made a contribution to the growth of the marque. Another indispensable feature was Dollar's sports record: Ridden by Clech, Lascombe and Druz, the 125, 175 and 250 Dollars achieved many competition successes, including in 1932, four world records in the 125 category. The most impressive was a flying kilometre covered at 65.5 mph. However, during 1927, Dollar abandoned the small-capacity four-strokes. They offered only a 175cc two-stroke, in addition to new 350 and 500 models with unit-construction Chaise engines.

The Dollar 175 CT3 Sport was an affordable lightweight four-stroke, though it was still far more expensive than contemporary two-stroke models.