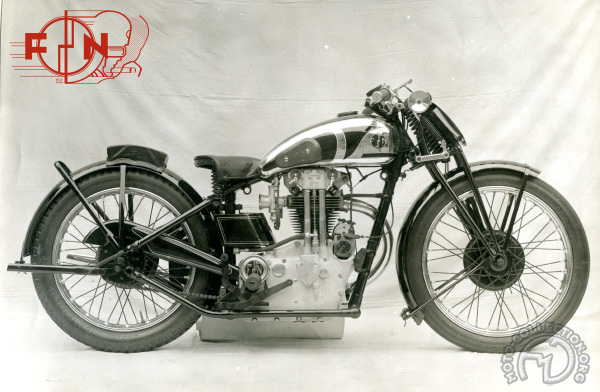 The 600cc M86 was perhaps the finest product of Belgium's Fabrique Nationale d'Armes de Guerre armaments factory, with its bronze cylinder head (its hairpin valve springs could be adjusted by hand), cast-iron cylinder barrel and elegantly-cast aluminium unit-constructed bottom end. It built its first motorcycle in 1901 and its last 64 years later.

Starting in 1934, FN marketed two Grand Sport models based on the single-port M86 racer. The 500cc M86 Grand Sport, with a twin-port head, optimistically claimed to develop 30 hp at 4900 rpm. The 600cc Grand Sport had a single-port head. At the same time, the factory offered single-port S models in 500 and 600cc forms. These had specially tuned magneto-ignition engines in the standard frame and came with certificates guaranteeing that they had been tested at over 100 mph by works rider Ren Milhoux.

Around 1000 examples of the 500 and 600 M86 were built, but the S version was rare Â– and the works M86 Grand Prix was rarer still. Though the Grand Prix works machines looked like the production version, the two bikes had nothing in common. Even the ignition was different Â– coil-and-battery on the left of the M86, magneto on the right on the overhead-cam GP machine. There was even a special version derived from the 600S, with a single-overhead-camshaft head, three valves and twin carburetors. Finally, there was an armored 600 M86 S sidecar combination, purchased by several armies. It was a curious end to the career of one of the great European spotting bikes of the 1930s.

Despite its racing accessories, this is a standard 600 M86 FN. Conversions were made by amateurs since the Sand GP versions were rare.