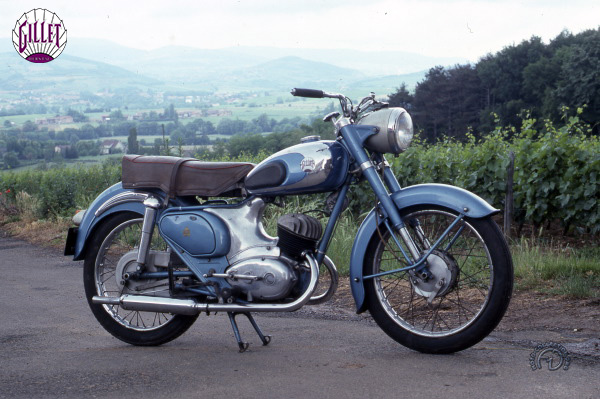 Last of a long line

Having virtually abandoned the production of two-stroke bikes during the 1930s, the Gillet factory returned to them during the 1950s. A new range of lightweight motorcycles had egg-shaped crankcases fitted closely over the mechanism within.

Launched as a 175, the engine was increased to 200cc. A further increase in bore size brought the displacement to 250cc (the stroke remained unchanged on all three models). Customers had the choice between the utilitarian rigid-framed Légia, an improved Légia with plunger rear springing or the Belgica with swing arm rear suspension.

For the first time in many years, Gillet went to outside suppliers in Germany for components such as the hubs and forks. Another major shift in policy came on the color front. Instead of the traditional black, gray or maroon finishes, customers were offered a choice of bright colors, in shades of blue, red, cream, green and putty-color. There was even a single bike painted mauve Ā– the favorite color of company head Léon Gillet Ā– which was displayed at a motorcycle show. It failed dismally and was hastily repainted in a more conventional shade. Fifties fashion dictated the partial enclosure of the frame; the carburetor and its filter were concealed under a polished aluminium pressing. This elegant 250 marked the end of Gillet, which, after merging with FN and Saroléa in 1955, closed down five years later.

Bright colors and dashing of chrome gave the Gillet Belgica added customer appeal, but the company only survived until 1960 .