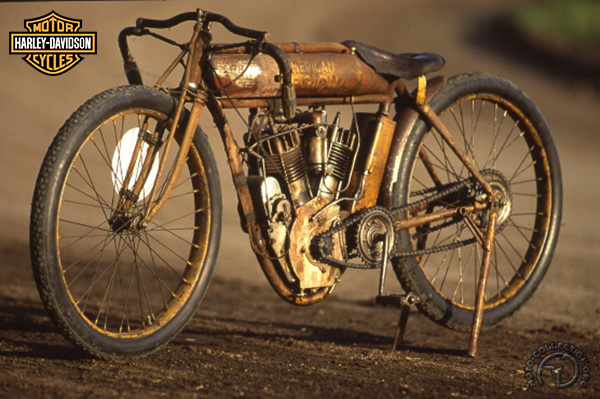 William S.Harley, the designer, and Arthur Davidson completed their first motorcycle in in 1903. It incorporated the best current technology and proved strong and reliable enough to attract a growing band of customers. They built a factory and brought in Davidson's two brothers to assist in what was formalized as the Harley-Davidson Motor Company in 1907.

In response to the demands of the clientele, who were always asking for more power, and as a riposte to the launch of a 430cc Indian racing single in 1905 (followed two years later by a production version), Harley brought out a new 564cc (84x102 mm) single in 1907.

It developed 4 hp and was good for 50 mph. It was joined in 1909 by an 880cc V-twin capable of 55 mph. The single was redesigned in 1913 with magneto ignition, dual-ratio chain drive with a hub clutch and the remarkable Harley leading-link front fork. Built to high standards of quality, it used vanadium steel in its construction as did another contemporary American icon, the Model T Ford Â– and cost just $235. Though Indian was still the sales leader, Harley-Davidson was coming up fast Â– aided by the many wins achieved by private owners in races and endurance runs, though the factory refused to back a competition program until 1913, when William Ottaway was recruited from Thor. He developed a catalogue racer, the II-K V-twin (which gained 8 valves in a Ricardo head in 1915) from which a single was born. It was rare (30 built) and costly; many private owners preferred to build their own racers around production Harleys, like this well-preserved 1917 flat-track racer.

This 35 ci, shown on a West Coast flat-track, was converted in 1917 out of a standard "Silent Gray Fellow" roadster with a pocket-valve power unit.