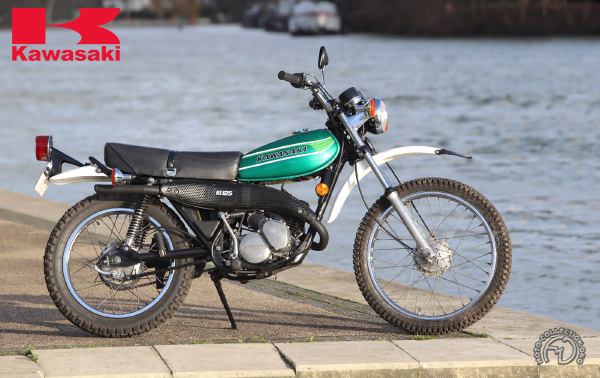 Having long concentrated only on the US, Kawasaki realized in 1974 that the trail bike market had really taken off in Europe (and in particular, France, where each year tens of thousands of 125cc trail bikes were sold). The unchallenged champion in this fast-growing sector was the Yamaha DT 125; to make its mark, Kawasaki had to roll up its sleeves.

The KS was the perfect answer, for it combined a fiery temperament with first-class cycle components. Its new engine incorporated the classic induction system by rotary-valve, long typical of lightweight Kawasakis, and thus developed 13 hp at 6500 rpm. More highly-tuned than its rival, the KS was unhappy during low-speed maneuvers, off-road or in town, and was less of an all purpose machine. On the other hand, it was an excellent beginner's machine for endure and was class-leader when it came to covering rutted stages rapidly.

Redesignated the "KE" for 1976, the 125 Kawasaki trail bike became more comfortable and refined (but lost 2.5 hp in the process). A stylistic freshening kept it going into 1979, but it gave way in 1980 to the new KE 125 A, which was more powerful (13.5 hp) and more sporty and took its layout from the marque's motocross machines Â– it had greater suspension travel.

With its striking iridescent metallic green fuel tank, the eye-catching Kawasaki KS 125 was aimed squarely at the youth market.