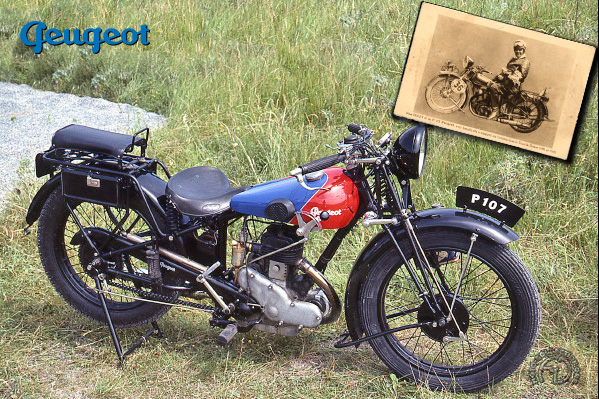 The lion shows its claws

Peugeot's emblem is the Lion of Belfort, the symbol of French defiance. Until1926, Peugeot had nothing more exciting in its catalogue than dismal 175 and 250cc utility two-stroke models. It was high time that the Lion of Beaulieu Valentigney showed its claws

Then the range was completed downwards in 1929, with the P103 and P11O, 175 and 220cc side-valves, still with unit-constructed engines. In this way, Peugeot hoped to improve its image and effectively compete with its great rival, Terrot. Without matching the sales figures of the 350 Terrot side-valve, the P107 a typical "average man's motorcycle" of the 1930s - enjoyed sound commercial success. It remained in production until 1936, when it was replaced by the P112. The P107 left behind it the memory of a reliable, troublefree bike but with a colorless personality. It was certainly handsome, with its cleanly designed unit-constructed engine, still a fairly rare technique. The P107 was the favorite mount of a tireless globetrotter named Robert Sexé who even ride it across the Sahara. These proofs of strength were probably the arguments that convinced the French Army to order several thousand examples of the P107.

The Peugeot P107 was a classic French middle-class motorcycle of the 1930s.