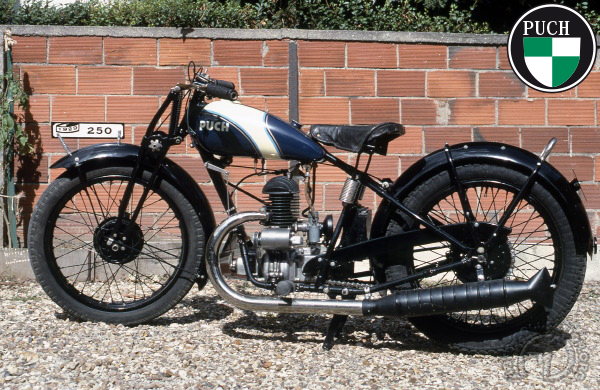 After WWI, Puch did not resume production until 1924, when its activities acquired an international dimension under the direction G. Marcellino. From 1924 to 1938, the Puch factory at Graz produced no less than 67,357 motorcycles in 24 different models.

The 1924 LM 122cc inaugurated Marcellino's pet technique of a double-piston two-stroke, a layout intended to improve cylinder filling by cutting down losses of unburnt gas through the exhaust port. Puch used this technique until the early 1960s. The intake port was in one cylinder, the explosion took place in the common combustion chamber and the exhaust port was in the second cylinder. Originally, the crankshaft was set longitudinally with a Y-shaped connecting rod for the two pistons. Right-angle gearing took the drive from the gearbox to the chain sprocket. The clutch was incorporated in the rear hub.

In 1925, the LM was followed by a 3 hp 175cc, and in 1926 came a 220cc 4.5 hp of which 12,000 examples were built in three years. Encouraged by this success, Puch attempted to move into a larger displacement category with a JAP-engined 500, but only 500 were sold and production was halted. Puch returned to the double-piston formula with the 250 T, which developed 6 hp and featured a separate lubrication system in which the oil feed was directly proportional to the throttle opening. It was another success, and 13,200 were sold between 1929 and 1932, added to which were a further 800 units of the 250 SP - tuned to develop 8 hp.

The blue and yellow color scheme of this 250 T earned it the nickname "Colibri" (humming bird). The twin levers (inset) control gears and ignition.