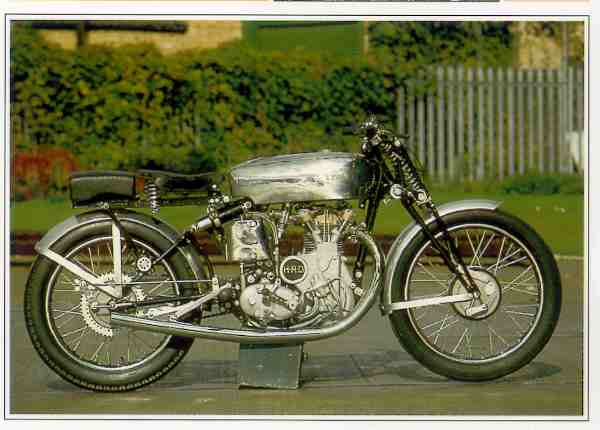 Slow start for a legend

After a disastrous participation in the 1934 Tourist Trophy with a batch of allegedly special JAP engines, Philip Vincent- owner of Vincent-HRD- and his brilliant engineer Phil Irving designed their own power unit. A 500 single incorporated Vincent's high-set camshaft and angled tunnels carrying extrashort pushrods. Enclosed pushrods were a rarity at the time. The general layout would remain a feature of Vincent engines.

Revealed at the 1934 London Show, the engine was not even finished when it was announced that the new Comet sports would exceed 90 mph. The Vincent 500 was put into production in record time, and in the 1935 TT Vincent-HRDs fmished seventh and ninth.

However, more power was needed to bring outright victory, so five Vincent-HRDs were prepared for the 1936 TT, two of them with Zoller superchargers. The blown machines failed to last more than a couple of laps in practice. Four Vincent-HRDs started; three retired and only Jock West fin ished. He crossed the line eighth, pushing his bike, which had snapped its chain, way behind the winning Norton of Jimmy Guthrie and the second-place Velocette of Stanley Woods. The 500 single would never run in the TT again. The works concentrated on its V-twin. Nevertheless, when a 500cc "TT Replica" was stopped for speeding by the police, its rider was acquitted on the grounds that his bike could not have reached 110 mph!

The magnificent TT Replica Vincent-HRD of 1936 had a bronze cylinder bead and a massive Amal TT carburetor.